Al Jazeera’s currently unfolding news coverage of the Libyan Revolution is hugely symbolic: the left hand of the screen depicts jubilant crowds who have gathered in Benghazi following the news that the ‘rebels’ have taken control of Tripoli, the right hand side of the screen depicts the rebels as they are trampling, kicking, hitting and even driving over a carpet that depicts Muammar Gaddafi. Al Jazeera thus sets out one of the overriding dichotomies evoked by the Arab Revolution: hope symbolized by the jubilant crowds in Benghazi and fury symbolized by those defacing the image of Gaddafi. The defacing of Gaddafi’s image in the Al Jazeera’s news footage has been, in fact, a reoccurring theme during the Arab Revolution. As the autocratic regimes of Tunisia and Egypt were toppled, it was representations of Ben Ali and Hosni Mubarak attacked by protestors. Even in countries where the political shift has yet to occur, representations of dictators such as Ali Abdullah Saleh of Yemen or al-Assad of Syria are a common target for those seeking the end of their reign. The Libyan Revolution in particular vividly illustrates that the defacing of a dictator’s image holds, in itself, a political power protestors appear to tap into. A recent news photograph depicts rebels as they poke their guns into a Gaddafi poster. The gun penetrating the surface of the poster is symbolic for the rebels penetrating the instruments of power of the regime. Importantly, a hand holding a mobile phone can be seen reaching into the image. The phone is recording an action which is similarly performed all over liberated parts of the country. The defacing of the poster is not simply an action worth recording  but becomes a recognisable gesture symbolizing the eventual toppling of Gaddafi himself. To deface, as the dictionary notes, is to mar or spoil the appearance or surface of an image. Derived from the Old French word desfascier, it literally denotes the disfigurement of the ‘face’. In the true sense of the word, defacement of an image presumes that the image depicts a human being. As all the aforementioned regimes are ruled by individual men, it is only natural that it is their image that is consistently attacked. In other words, an autocracy, or a form of government in which one person possesses unlimited power, is the very precondition for the popularity of the defacement of rulers during the Arab Revolution. In Libya, after being visually bombarded with images of Gaddafi in heroic poses for more than four decades, the frustration of the Libyan people is most bluntly observed in the way they attack Gaddafi’s image. Attacking representations of Gaddafi becomes the conduit for political and ideological opposition. Another news photograph depicts a little girl as she is kicking a drawing of Gaddafi. A reading of the photograph suggests that while the little girl is not participating in the armed uprising as such, she is, symbolically, standing up against his tyranny. The defacement of Gaddafi thus becomes a gesture that is not exclusive to those participating in the armed struggle. In the photograph, like in many other similar photographs, the physical contact between the shoes and Gaddafi’s face connote the ultimate insult in Arab culture as George W. Bush once famously dodged shoes at a press conference in Baghdad. 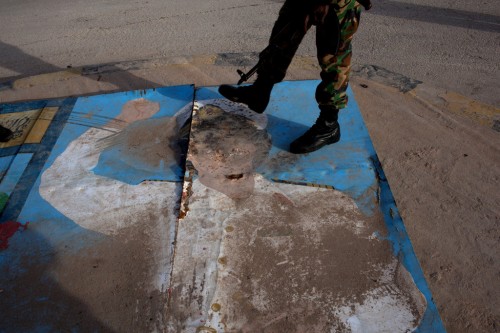 It is important to note however that there is a significant difference between defacing an image and destroying an image. Representations of Gaddafi are penetrated, torn, drawn over, kicked, hit, spat at, maybe even burnt – yet ultimately, as an image, it often survives.

In the photograph above, the paint of a Gaddafi street mural is crumbling away in parts where it has been most consistently kicked. Yet Gaddafi right hand fist can still be seen as it is defiantly raised towards the sky. So rather than concentrating on what defacement is doing, let me spell out what it is not doing: it is not entirely getting rid of an image, a representation, a poster or any other type of visual propaganda imaginable. The partial preservation of Gaddafi’s image suggests that, ultimately, in order to move towards an unknown future a reminder of the past must stay in sight.