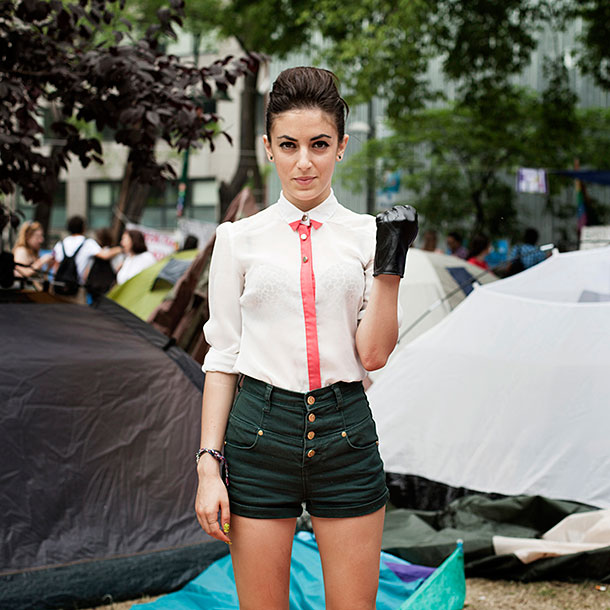 Remember the Vogue spread using Hurricane Sandy and rescue workers as the setting and props for a fashion spread?  Or, the Coke Gold Peak Tea campaign turning the discontent fueling Occupy into a promotional contest?

The corporate state, by way of its Mad Men and women, has the perfect answer for populist discontent or any social ill that starts bucking for attention: appropriate and glamorize. In light of America’s civil defense establishment squelching the homegrown Occupy movement, NY Magazine responds to this Turkish iteration by framing it as a fashion statement. Nike meets kaffiyah meets oversized billed cap. Just do it!

And then, we have the VICE suicide post that was removed yesterday when the public and social support agencies failed to see the humor in photographs dramatizing famous female writers offing themselves. With the failure of gun legislation, the erosion of the safety net, and each new massacre on the homefront, depression, anxiety, trauma and identity problems clamor for recognition.

And then, what about that new Direct TV ad having fun with domestic terrorism this soon after the Boston Marathon bombings and the manhunt ending in the suburb of Watertown? In the ad, we see a lawyer, too distracted by poor TV reception to adequately defend a client, paying the price.

As America Inc. deftly sidesteps complex and costly social problems, it’s interesting how these “elephants in the room” are so quickly adapted as fashion.