Pairing a CNN article with this photo from a Mar-a-Lago guest, we have evidence of the Trump dinner table turning into a crisis command center over the news of a N. Korean missile launch. Who knows if those documents were classified, what with the Japanese Prime Minister, his wife and Trump’s wife, and the owner of the New England Patriots all around. What we do know is that Trump’s aides converged on the table and the potential crisis was handled in public, fit between the iceberg wedge salad with blue cheese dressing and the main course.

200K to Mar-a-Lago basically buys you a seat in the Situation Room https://t.co/5t55wN4QeW pic.twitter.com/tdNltbbirM

What’s outstanding about the Instagram photo, however, is how it demonstrates Trump’s conflict between country club owner/party host and Commander-in-Chief. The dreamy look during a potential world crisis is quite damning.

For more context before things went full Situation Room, this photo by NY Times photographer Al Drago was taken at the start of the dinner. 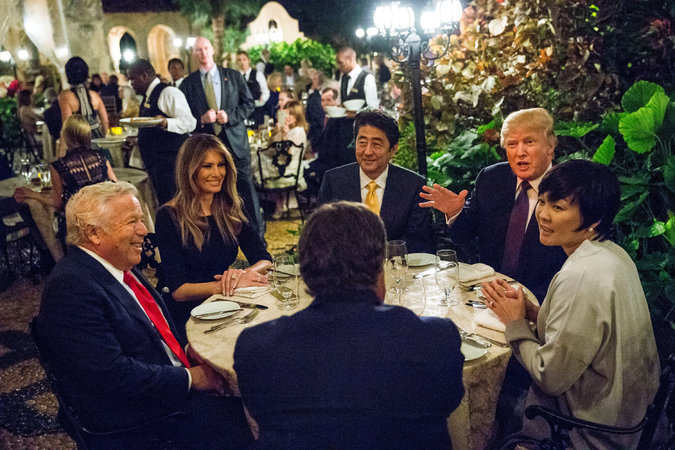 We see how Trump holds court in the Mar-a-Lago dining room. If you notice the woman in the distance taking a photo (between Melania and Prime Minister Abe), you can also appreciate how Trump is the star that everybody (especially the members footing the $200,000 membership fee) has paid to see.

That’s not the only picture from the Abe trip, though, that informed Trump’s readiness for the job during the Abe visit. At the White House the day before, Trump listened and nodded as the Prime Minister addressed reporters during their joint press conference. Because he went without the ear mic to hear the translation, it’s clear Trump was acting.

Some speculated on social media that Trump didn’t wear the device because of how it make him look. Trump did hold hold mic to his ear to understand and answer questions from Japanese reporters. Back to Mar-a-Lago, though…. What was also unnerving was Trump’s performance at the impromptu briefing addressing the missile scare. It was held in one of the ballrooms after dinner.

At least Trump deferred to the experienced politician to address the situation. When it was his turn to add a few words, Trump didn’t even mention North Korea. Rather, he expressed America’s “100% support for Japan.” According to CNN, Trump had written remarks on the situation sitting on the lectern, but he never used them.

In the photo above, we see a not-unfamiliar expression. It’s the one where the tactical Trump is actually visible. Perhaps he’s even looking at the remarks prepared for him?

George Bush’s reputation was crippled by the 9/11 crisis, visually marked by the infamous “The Pet Goat” photo. Trump’s expression here bears some relation to Bush’s that day, the glare in some part reflecting the novice he is. Next Post Overshadowed by his Photo: The Afterlives of Omran Daqneesh