Race Optics and the 2016 Academy Awards It being Hollywood after all, last night’s Academy Awards show managed to present the most entertaining kind of civics lesson. Studying the images in isolation, though, the evening wasn’t nearly as slick as it seemed. I offer you some highlights and also some lesser lights.

The screenshot about was certainly the political image of the night. More than any guilting or shaming of the Academy Award audience, Rock’s video interviewing moviegoers in Compton was stunning.  (Meryl who? Carol who? Spotlight what?) In the screenshot, we see Rock, in his expression (and his tuxedo) straddling the astonishing and bluntly demonstrated gap between two Americas. And, gripping a real Oscar, what a wonderful mixture of joy, sheepishness and audacity this woman offered the academy and the viewing audience. Sure, BuzzFeed had the visual “buzz idea” of the night. In their post, they purport to show Hollywood’s finest reacting awkwardly to the Chris Rock opening race lecture/monologue. (Transcript.)

Yes, how fascinating seeing the best actors in the world, knowing they were on camera, suddenly doing CYA improv. The problem is, Rock’s brilliant sketch was a partly-polemic, partly hilarious weave of blaming and empathizing —  a Creed-quality combination of lulling, baiting and biting. Without knowing exactly what Rock was saying when, though, we have no way of knowing what these actors — admittedly, fish in a barrel — were reacting to the exact moment. If they had confined themselves to screenshots like this (also from the article), they would have been on the money, so to speak. Because the Trump style of “gotcha” is the standard this year, however, it seemed as fashionable to take a blunt instrument to the (Hollywood) establishment. 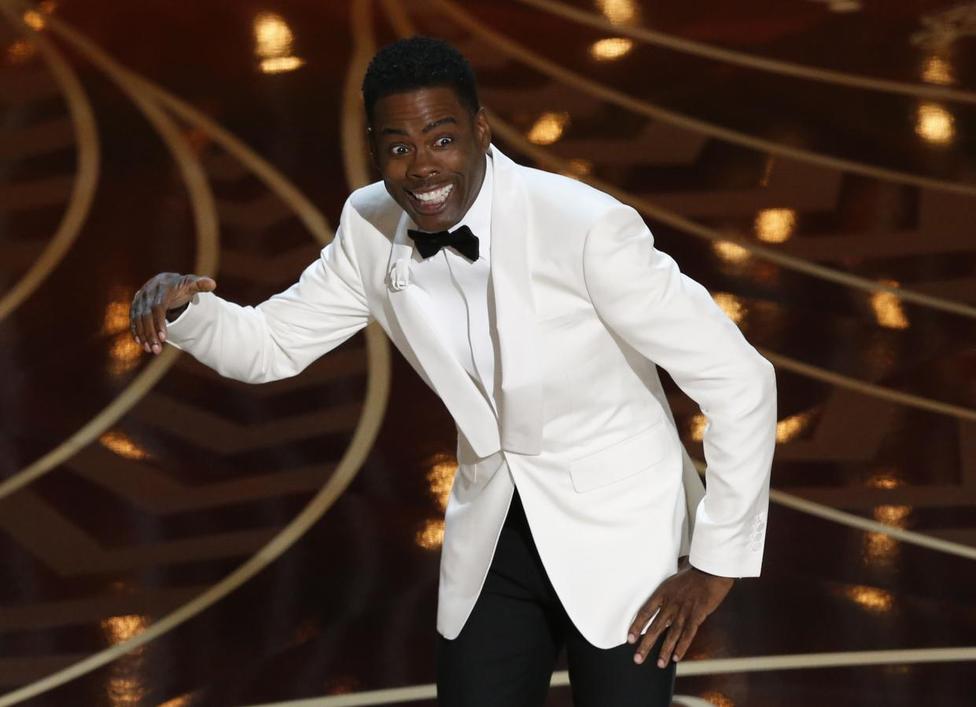 I found this Reuters photo from its Oscars slideshow terribly awkward. Chris Rock is brilliant at using humor, including his voice, face and body language, to evoke and play on racial attitudes and stereotypes. But not out-of-context like this. Bug-eyed and hunched like that, the photo echoing a Minstrel-y vibe, Rock himself is being caricatured. Perhaps the media, as an extension of the white establishment, can only take so much?

On the other hand, the L.A. Times photo of survivors of sexual abuse, and then the Reuters shot, capturing Lady Gaga standing in solidarity with them, are thoroughly respectful. 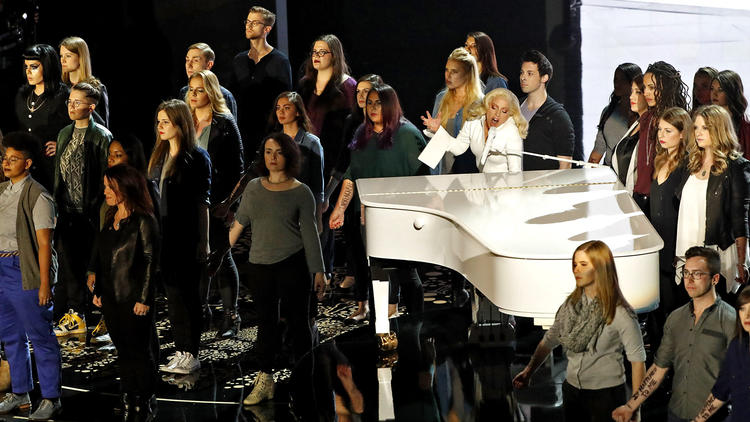 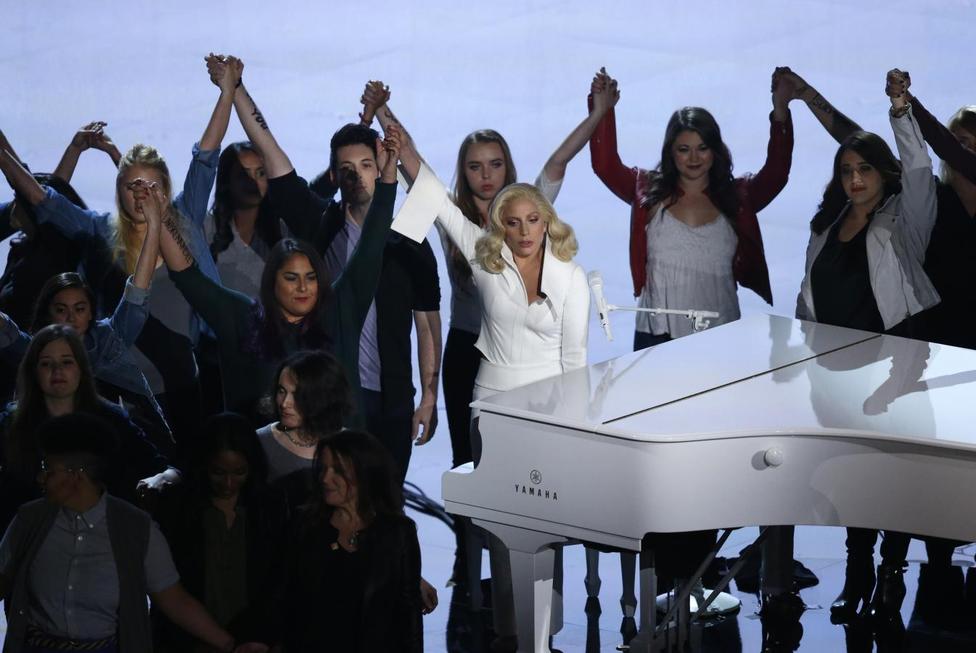 I liked both of these images (the former from the LAT Oscar photo gallery) for the way they prioritize the survivors. What made the moment that powerful, though, just like in Rock’s Compton video, was the presence of actual citizens — here, the embodiment of social injustice — amidst the monied stars. The challenge here for the show producers was to avoid the sense they were substituting one political issue for another. And that, they did. 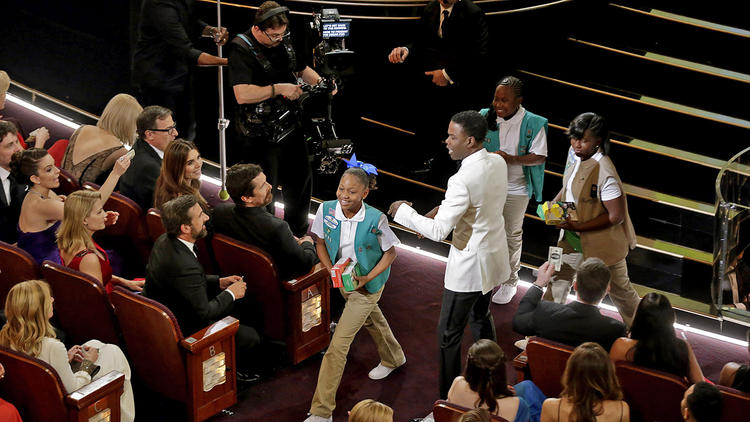 Here’s the racial element that really threw me, though — and I’m surprised but not surprised there has been so little mention of it. I found it incredibly awkward that Rock, using his daughters as a foil, brought out an all-black girl scout troop to solicit sales from the mostly white multi-million/billionaires. If there had been a mix of black and white girls, it would have been different, but that wasn’t the case. 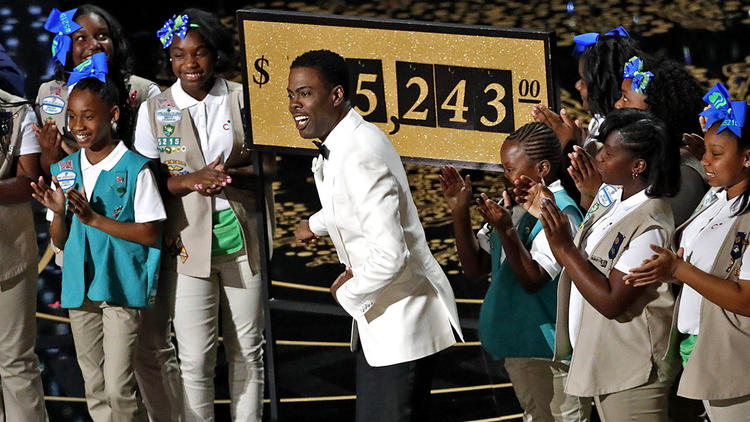 In juicing the assembled elite for cash, Rock confined his quips to how filthy rich they all are. In the larger picture, it didn’t do Rock any credit silently playing on white guilt when the rest of the night he openly drilled the industry on racial disparity. Instead, raising an eye-popping $65k in a matter of minutes, it looked like a shake down. (Remarkably, even this breezy NYT blog post used the phrase.)

And then, there was our reaction to this Getty promo photo two days before the event (which seemed to pan out right): The Christopher Morris Assault and the Incitement of Violence Next Post The Christopher Morris Assault and the Incitement of Violence