How can you tell the difference between a political protest in Russia and one in America?

No that’s not the first line of a joke. The question is about how familiar Americans are with Russia. And it’s about the burden placed on news photos, photo slideshows, and how much or little information they communicate.

The fact is, many news events, especially international ones, have largely been reduced to slideshows. Take the Reuters Picture site, for example. It offers remarkably comprehensive coverage of domestic and international stories. It consistently covers the war in Iraq, international protests; natural disasters and terrorist attacks; and drought, famine and disease. The catch is that the stories consist of slide shows (1, 2, 3) elaborated only by short and typically redundant captions.

Otherwise, there is scarce coverage of these serious political events in the mainstream press. (The last time I wrote about this was during the presidential campaign when the punishment inflicted on Haiti by Hurricane Matthew was largely eclipsed by Trump mania.) You could argue that some coverage is better than no coverage. Or that a picture is worth a thousand words. The problem with seeing dozens of photos of a story with captions alone, however, is the lack of context.

That is the challenge looking at the widely published photos of last week’s anti-Medvedev, anti-Putin, anti-corruption protests in Russia.

Perhaps I see so many parallels between U.S. and Russian protests in the photos because of the shadow of “RussiaGate,” and Trump’s attraction to Putin and authoritarianism. Maybe public reaction to crony capitalism looks pretty much the same here and there. Or perhaps it’s because the countrywide protests caught Russia off guard, so the pictures show an unusually robust and unintimidated citizenry and an unusually mild response by police and security forces. Perhaps we can just blame Nike. A  documentary film released earlier this month traces Prime Minister Medvedev’s purchase of western goods (symbolized by his Air Max 95s), and connections to people and organizations that made him phenomenally wealthy through lavish gifts. The film was the catalyst for this wave of protests, as well as the photo leading the post. 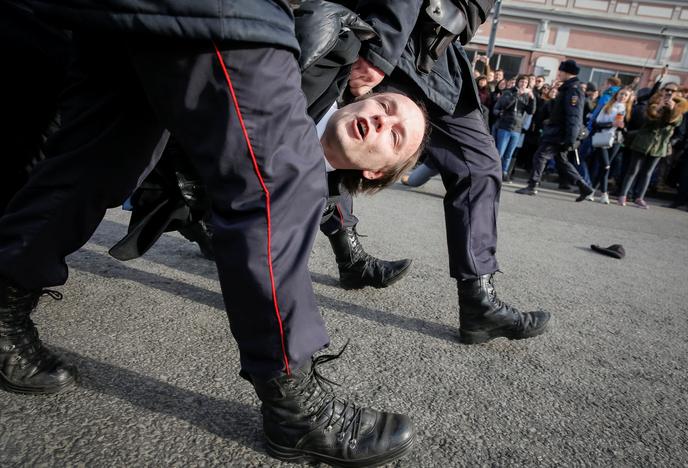 I’m not sure how much this photo draws a parallel with the west, unless we’re talking about tone. Certainly though, news photography keeps becoming more robust, drawing — in this case — on humor and analogy.

There’s almost a lunatic or Dadaist quality to this photo, especially because the man looks a little like Putin. That being the case, the protesters equilibrium speaks to a society that carries on (with the help of the enforcers) even if it has gone sideways.

This photo from Russia protests shows grace, youth and bravery of activists pic.twitter.com/hGO4hQ9lQL

This photo, on the other hand, could have been taken during the Occupy movement or any recent American protest. In both America and Russia, it’s the young people acting undeterred by the propaganda. 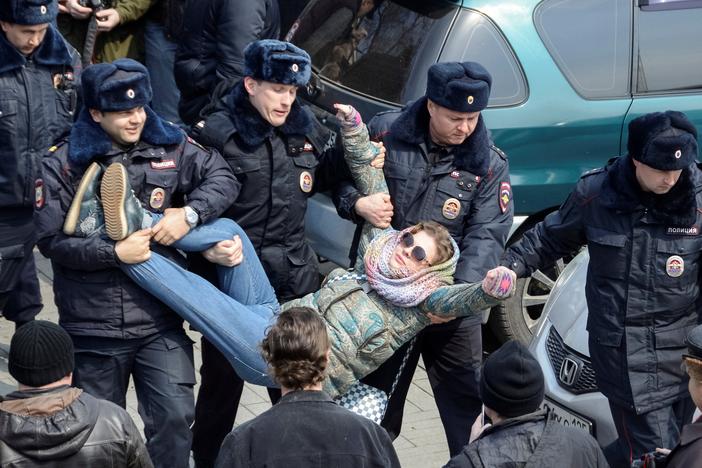 A variation on the theme, what are we to make of this photo, though, highlighting a hipster-ish protester as if she were crowd surfing or doing a dance number with these Russian policeman? The slideshows needing to be populated, perhaps this shot is less about speaking truth to power than about media magnetism and the combination of political drama, youth and cool?

If there is one photo that represents a clear political contrast with an American protest, however, it’s this one. We still respect press rights in the US, even if Trump is straining that license. The dark masks are also a reminder how people in Putin World can disappear without a trace. Trump, the Mosul Atrocity, and a GIF That Says it All

Next Post Trump, the Mosul Atrocity, and a GIF That Says it All